Destination comparisons also reflect a greater interest in where immigrants are living now, how their lives change after arrival, and the links between migration, integration and inequality. Nevertheless, comparisons with non-migrants in the destination only tell us part of the story about immigrants’ lives. If we additionally make comparisons with non-migrants in origin countries, then this can help us to understand why the outcomes of immigrants differ from non-migrants in the destination country. Often, immigrants are said to be “selected” from their origin populations. This might mean that those who leave a country are, for example, more highly educated or healthier than those who stay behind. These two factors are not independent. If some people are more highly educated than others, then they are probably healthier too, and vice versa. Although destination comparisons can tell us a lot about the experiences of immigrants in their new country, they say little about selection unless we compare them with the population they are selected from.

In our study, we estimated relative mortality, versus origin, of immigrants from the 35 countries with the largest immigrant populations in the United Kingdom, by age and sex. We analysed data on deaths and population sizes from the Office for National Statistics (in the UK) alongside equivalent data for origin countries from the Human Mortality Database and the United Nations World Population Prospects. We also analysed equivalent data on the educational attainment – of immigrants versus their country of birth – as a more widely accepted measure of selection (Feliciano and Lanuza 2017) and a characteristic that remains quite stable with time (unlike mortality, which is directly affected by people’s experiences in the destination country (Ichou and Wallace 2018).

Figure 1 shows the age-specific mortality of immigrants relative to the population in their countries of birth. The far-left panel shows the “average” for all immigrants living in the UK plotted in black, with individual immigrant groups plotted in light grey. The red line indicates mortality in origin countries at a given age. Values below the red line indicate a mortality advantage, whereas those above the red line indicate excess mortality among immigrants. The other panels show four examples of immigrant groups from countries with different levels of the Human Development Index (HDI), ranging from low (Nigeria) to very high (the United States). These examples are fairly typical of the averages for each HDI category that we show in the full paper, and they illustrate three key findings. First of all, there is a common shape across panels, in which the advantage is largest at young adult ages and decreases with age. Second, the advantage at young adult ages is largest among immigrants from poorer countries and diminishes as we move up HDI categories. Third, we find that substantial mortality advantages exist at older ages (65+) for countries in the low and medium HDI categories, but not for groups in the high and very high categories. 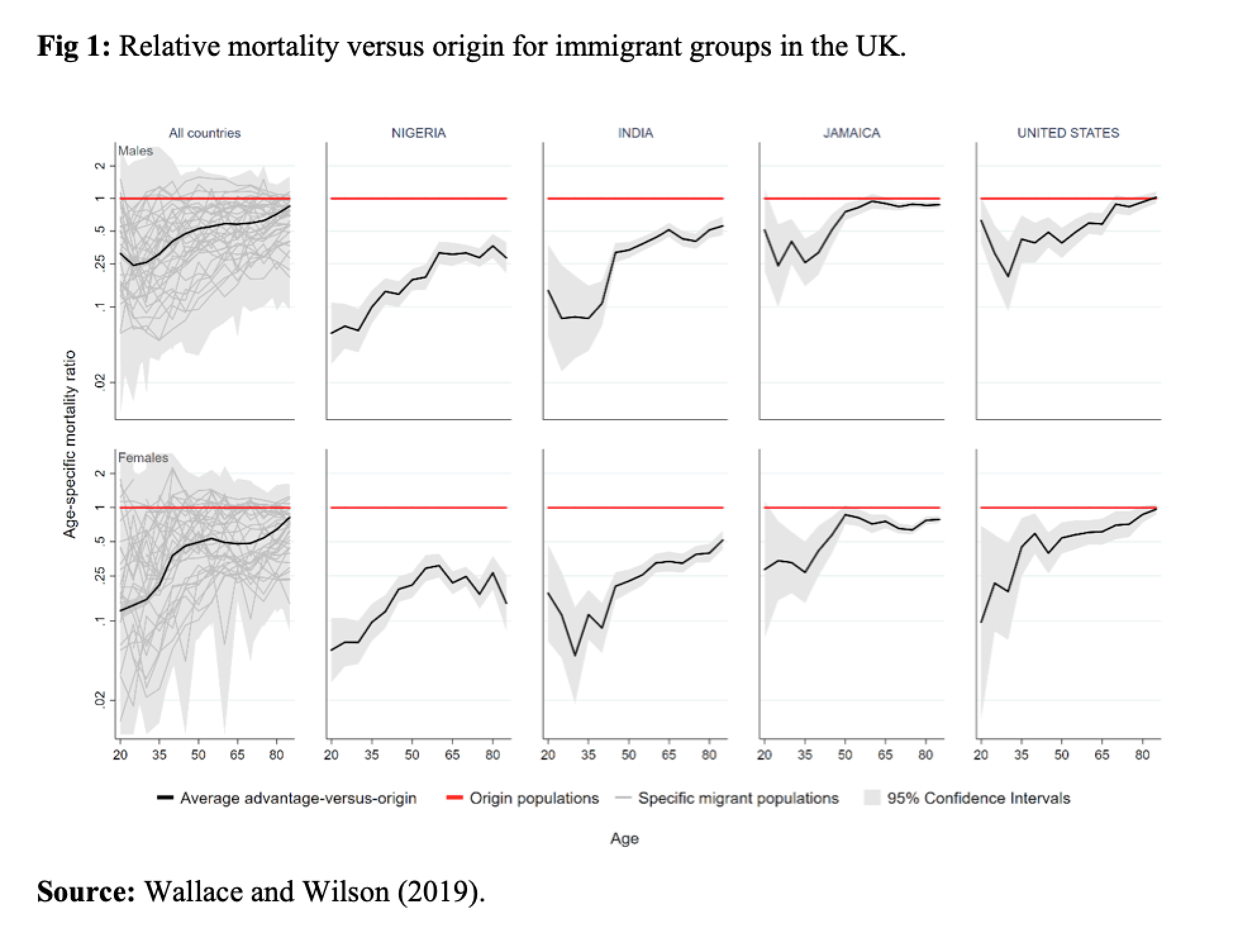 Figure 2 shows an almost identical analysis, but with a focus on education. Here, the far-left panel shows that immigrants almost always have higher rates of tertiary education than average members of the population in their country of birth. There are only a few exceptions (i.e. the light grey line is below the red line), with the clearest case being Lithuania (not singled out here). Generally, the size of the differentials falls as we move up HDI categories. For example, Nigerian immigrants are much more highly educated than their Nigerian origin population, whereas immigrants from the US are only somewhat more highly educated than the US average. Variation over age is likely to reflect cohort differences in migration, as well as cohort trends in the origin countries, including factors such as educational expansion. 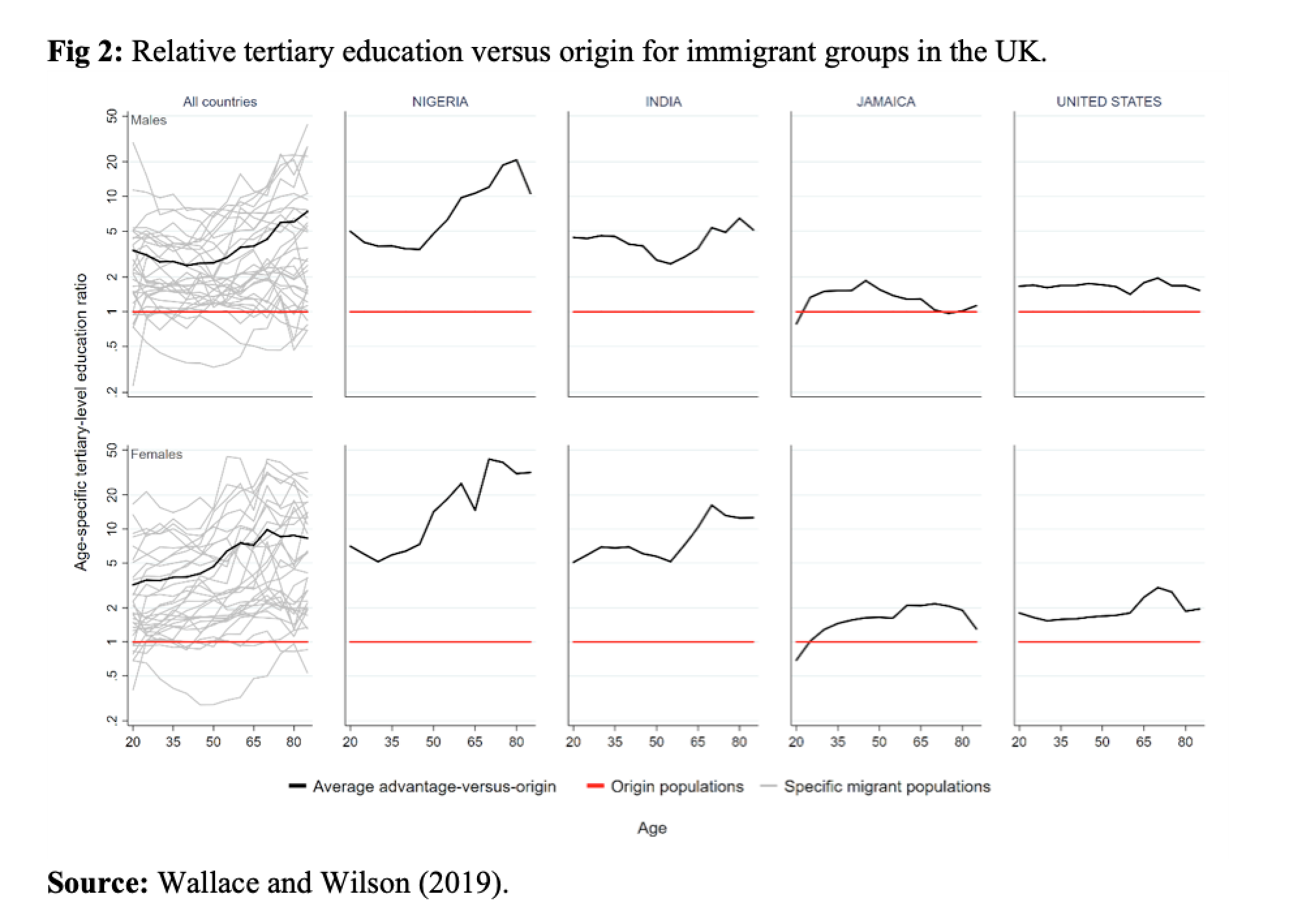 Conclusions: selective selection at work (but weakening over time)

So, what do these findings tell us? We think that the patterns provide evidence consistent with selection. Immigrants have lower mortality than the population in their country of origin, on average. The lower the level of development in the origin country, the larger this advantage tends to be. This suggests that immigrants from poor countries need to be more strongly selected than immigrants from rich countries in order to generate a similar mortality advantage vs. the same destination population. Next, the advantage is largest at young adult ages and diminishes with age. Since the majority of immigrants arrive at young adult ages, this finding is consistent with the idea that selection effects are strongest shortly after immigrants arrive and weaken over time. In absence of data on duration of residence, it is at young adult ages that we come closest to capturing the extent of selection effects among immigrants, as these are the ages where the selection has just taken place (and exposure to life at destination is minimised). With time and a growing influence of destination-specific risk factors that affect mortality, the role of selection diminishes. Last, immigrants are also more highly educated, on average, than their origin populations. Given that education is a more stable measure of selection (because it is unlikely to change from young adulthood onwards), this result adds further support for our conclusions on mortality.

Overall, our findings represent an important reference point in the re-conceptualization of immigrant outcomes relative to origin country populations. We are not the first to make such comparisons (Marmot, Adelstein, and Bulusu 1984; Gadd et al. 2006), but our study is the first to do so for such a diverse array of countries and in such detail (i.e. by age, sex and origin country), even considering comparisons to destination. Given that selection seems to be an important explanation of the migrant mortality advantage, we should consider how the flows of selected people between countries – often from poor to rich countries – impacts positively on national mortality metrics in rich countries, negatively on national mortality in poor countries and potentially inflates the size of health inequalities between them.